Our Approach to Selling Signs, Part 5

PART OF A PROCESS

The following examples are how we have used sign prototypes and demonstrations and involve some of the most technically challenging situations and why they were a necessity. But even when selling the more typical sign projects like electronic message centers for a church, or a set of channel letters on the front wall of a local retailer, there are benefits of smaller scale demos and mock-ups.

Here are three reasons for considering sign prototypes and demonstrations:

The location and entrance of a client’s medical complex was hidden from the main highway. They needed help with signage that directed people to their site for services. Because of the elevation of the property and high speed of passing traffic, a sign raised substantially off the ground was their best bet.

Utilizing a weather balloon, we aided our designers and client in gaining a clear picture of just how the sign would appear from the roadway. Our customized demonstration indicated the best heights and bearing points necessary to reach the most traffic.

When owners of an historic Virginia hotel began redevelopment, they needed to make substantial energy improvements to obtain HUD funding.  We had to make sure the proposed new energy-efficient signage was historically accurate.

The old landmark sign was rusting away. The lighting once used to illuminate its gigantic letters was the old incandescent type. There were some 1,400 light bulbs per side that regularly burned out and there was always a big safety concern involved with changing them.

Our creative solution replaced old incandescent bulbs with low-voltage LED lighting that looked historically correct by using modern digital printing technology. We demonstrated prototypes prior to final manufacture. Collaborating with the owners, architect and general contractor we tweaked the digitally printed bulb designs and LED lighting placement to where all parties were satisfied with the effect.

Cost containment is a big benefit of using prototypes for signs, especially for high-rise applications. From our experience, we know it’s best to get it right on the ground before committing to build the whole thing.

We provided a Gen 1 Prototype based on the original design specifications. After critically viewing the first version of the illuminated corporate logo from the ground, a team of senior executives immediately wanted it taken down and redesigned. Both the lighting and framework were redesigned and a Gen 2 Prototype was prepared. Before this could be approved for production, a final Gen 3 Prototype was ordered because the client re-designed their logo.

Even with the extra cost in the early design stages, utilizing prototypes trimmed more than 50% off material, labor and fuel costs that would have been incurred had the three design changes been worked out later in a high-rise environment.

Just in case you missed them: 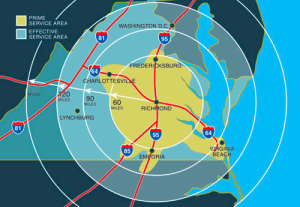 Signage Shouldn’t Be An Afterthought