If you are going to install a new sign, you will generally need a sign permit. Licensed electric sign companies who build and install electric signs generally handle the permitting as part of the project. Since the average fee to secure a sign permit is around $400-500, you can save money by getting the permit yourself.

It’s important to think from a permitting point of view from the start of any new sign project. Zoning codes and local ordinances need to be understood before a sign design is started. If not, you could end up spending extra for design changes. Most localities have sign quantity and area allowances based on street or building frontage. The language in most sign codes is so much area for so much frontage, or so many signs per each road frontage, etc.

There are some types of signs and sign maintenance activities in which permits are sometimes not needed. These things include sign face changes, routine lighting maintenance, repainting the sign structure, temporary signs and banners, historical markers, and interior signs to name a few.

In 2012 Holiday Signs created customized branding for a new branch of Pioneer Bank in Charlottesville, Virginia. The Stanley-based company expanded into Ruckersville and called on us again for signage. The bank’s new site had outstanding visibility since it was positioned at the entrance to a new Wal-Mart Super-Center in a fast growing area of Greene County; so how to get sign permits that were generous to business marketers out of the County’s zoning ordinance for sign allowances was an important matter. 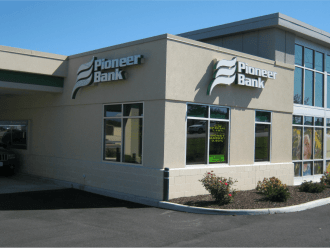 PW Campbell was the General Contractor for the construction of the new branch. Our contract for the signs was with Pioneer, but all coordination was through PW Campbell. The bank and the general contractor contacted us saying they had talked with the county and were only allowed one building mounted sign. Understanding the significant value of bright and eye-catching signage for customers with highly visible locations, Holiday Signs always digs deep into finding ways to get the most “punch” for our clients. By right, customers are often allowed more signage than they realize. In some instances, where restrictive codes limit customers’ visibility, we can serve as their consultant requesting special code variances on their behalf. Sometimes we are also able to suggest simple sign design ideas that can help raise attention when signs are limited in size and quantity by local codes.

After further research into the Greene County Zoning Ordinance, we were able to get Pioneer Bank three times as much sign area above what they had originally perceived they were allowed. This was a huge achievement because instead of only being able to utilize one small building-mounted logo on one side of the 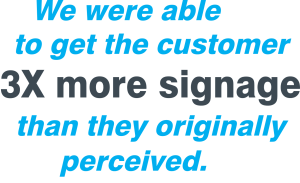 heavily traveled corner, they could now promote three new logos offering 24-hour identity and branding. One logo could face the sizable volume of traffic turning off Route 29, and the other two could face the critical Wal-Mart entrance road.

Depending on the locality, permits can take time, and it needs to be factored into sign lead-time estimates. We generally allow for 1-2 weeks for localities to approve permits, varying slightly by locality. Usually the more dense the population the longer the permitting will take. So obtaining sign permits in Northern Virginia (Fairfax, Arlington, Prince William, Stafford, etc) generally takes longer than say Chesterfield, Hopewell, Colonial Heights, etc. 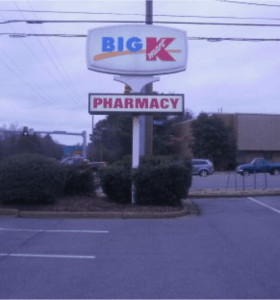 SIGNAGE BEFORE & AFTER- See how enhancing a sign’s structure can gain more attention and stay within code:

Code allowances related to sign area usually involve the calculations of the area of the sign graphics as opposed to the sign’s structural elements. Therefore it’s possible to add mass to new or existing signs and still stay within the local building codes.

Such was the case with the new signage we designed, fabricated and installed for Floor & Decor in Richmond, in partnership with the developer, S.L.Nusbaum Realty Company. The retail chain’s new Richmond location that occupied a former K-Mart across from the Reynolds Development used to be the big retail hotspot in the area but had been vacant for at least three years prior to Floor & Decor’s move into the building this year.

Prominent, eye-catching signage was essential because of their prime location at the busy corner of W. Broad Street and Glenside Drive, and also because Wal-Mart’s new Reynolds Crossing store nearby would soon be drawing even more traffic in front of their store. Plus, Floor & Decor was a new player in the Richmond area, so they needed effective branding of the building and site to help get their name out quickly to potential customers.

ADDING MASS WHILE STAYING IN CODE The old K-Mart pylon sign was a single pole type with a sign on top. Holiday Signs removed the old sign and replaced it with a two-pole pylon with decorative pole covers on a large base to offer more visual mass. Also, due to the growing traffic count at the corner, the new pole structure was engineered for adding an electronic message center at a later date, with steel framework in place to accommodate a new digital sign once the other half of the building is leased.

There was also a smaller sign located at another entrance that needed visual enhancement. We raised the small sign by constructing a large masonry base to make it more visible to traffic passing by on Broad Street. “It was an exciting project,” said Carter Thompson, Holiday Signs’ project manager who handled all the signage details. “They all love the signs,” Carter said.

If you liked this case study, here are some more:

How to Buy an Electric Sign?
Scroll to top